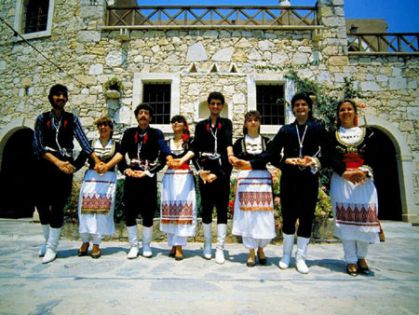 Music has always been a very important part of Cretan tradition since people were always expressing their fears, willingness for freedom and love by the songs. The cretan songs were also always accompanying the weddings, births, holidays and harvesting.

Rizitika are famous traditional cretan songs, coming from the villages in the foothills of the White Mountains and they may have derived from the songs of the border guards of the Byzantine Empire. There are two kinds of rizitika - 'tis tavlas' (table) songs that accompany feasts and 'tis stratas' (round) songs, which accompany the travellers. Mantinades are possibly the most famous form of musical expression; they are rhyming couplets of 15 syllables that express the age-old concerns of love, death and fate.

Songs are most often accompanied by the lyra, the cretan version being a three stringed pear shaped instrument, which has been played in Crete since Minoan times. You will also hear the mandolin and the laouto (lute).

Scenes of dancing Minoans in the frescoes prove that dancing in Crete began in the ancient Greek temples. Cretan dances are generally dynamic, fast and warlike. The most famous are the graceful and slow syrto, and the pendozali, which was originally danced by armed warriors and has a steadily increasing version that builds into a frenzy, with the leader doing kicks, variations and fancy moves. In the syrtos dance, which has regional variations, two or more dances are linked and the leader traces a circle as she or he moves continually to the right, in rhythmn to the song, both slow and fast. The sousta dance is a modern version of an ancient war dance, at a fast and lively pace.