Kreeta > Chania > What to see > Sights

The Fortress of Firka

One of the monuments which reflect the Venetian heritage of Chania is the Fortress of Firka. It is located at the end of the town's pier, to the seashore and it was part of a defensive system which begun in 1538 by the engineer Michele Sanmichele, who also designed Herakleio's defenses. The fort is still known with its Turkish name, Firca (Firka = barracks). A thick chain from Firka to the base of the light-house closed the harbour in case of siege.

The Venetians used to imprison in this castle those Cretans who were sentenced to death.  The Greek flag was raised on the Fortress of Firca in 1913, in the presence of king Constantine and the well known politician from Chania, Eleftherio Venizelo, in order to declare the Cretan union with the rest of Greece. This event was very important for the island, because it inaugurated a brave new age for the history of Crete.

Nowadays, the first building in the castle, which has been restored, hosts the Naval Museum. Here there are exhibited different types of cannon, navigation equipment, ship models, portraits and even a collection of rare shells. One important exhibits in the museum, apart from the navy exhibits, are the detailed Marquette of Chania like it was in the 17th century, together with the port and the Venetian dockyard, which has been presented until today.

Firka's wonderful view to the sea is offered for a variety of cultural events. Concerts of Greek music from local artists along with various theatrical plays, are taking place in the Fortress during summer. 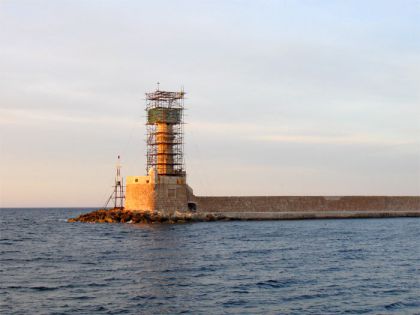 The visitors of the Chania old town can enjoy a short walk perimetrically of the breakwater to reach the Lighthouse. There is a lovely cafe bar a few meters from the Lighthouse with great sunset views.

The Mosque of Kioutsouk Hasan 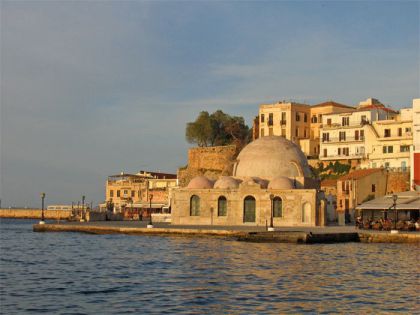 The mosque of Kioutsouk Hassan is the only mosque preserved in the city and dates back to the second half of the 17th century. It was built in honour of Kioutsouk Hassan, the first garrison commander of Chania and there used to be a one-roomed temple in its current position. The temple Kioutsouk (small) Hassan or Giali Tzamissi (seaside mosque) was the work of an Armenian architect, who had constructed another similar mosque in Spaniako, a village in Selino county. The mosque stopped operating in 1923.

Today it is restored but the small and picturesque minaret next to it was demolished in 1920 (according to other sources in 1939). It has been occasionally used as an Archaeological Museum of Chania, a storehouse, a museum of folklore art and an Information Office of the Greek National Tourism Organisation (GNTO), while recently it is used as an event and exhibition hall. 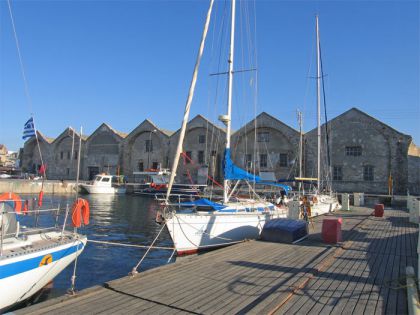 In the great Arsenali and the Neoria the ships of the powerful Venetian fleet were repaired during the winter time.

Today 7 Neoria out of the 17 still survive. In their original form they were open on the side of the sea. The ceilings are arched, and they are connected with arched openings of the same thickness as the walls.

On the photos are shown the 7 Neoria, the 2 newer Neoria, and the lovely stone-built cafe (Fortezza) opposite the Neoria (go there by boat). 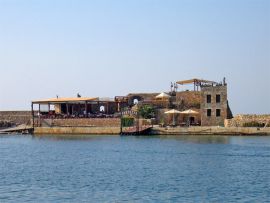 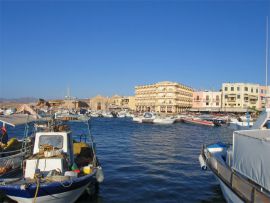 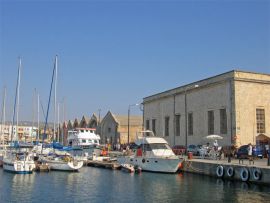 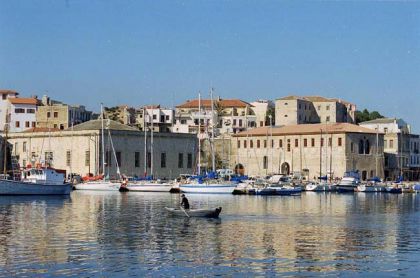 This is the last and biggest building on the west side of a complex of 17 shipyards. The construction of the Arsenali began in 1585 by the Commissioner General Alvise Grimani.

Today it is the home of the Mediterranean Centre of Architecture and regular events and exhibitions are hosted there.

Halidon street - The Orthodox Church of the three Martyrs 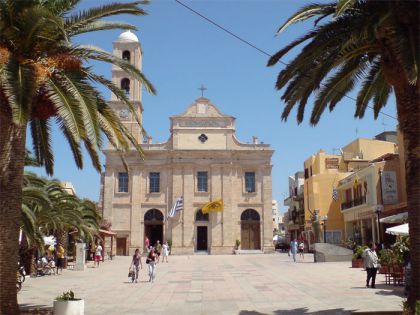 It is the most recognisable street of Chania which leads to the entrance of the old harbour. There are numerous shops and fast foods along this road. In the middle of the road down to the harbour, on your right hand side, you will see Chania's cathedral church of the Three Martyrs, built on the east part of a lovely square with tavernas, cafes and shops.

Across from the cathedral there is the Catholic Church. In its courtyard there is the entrance to the Cretan Folk Museum. Right next door there is the renovated church of St Francis, one of the most impressive Venetian churches of Crete. It consists of a temple and two closed courtyards, and it dates back to the 14th Century. Nowadays it houses Chania's archaeological museum, well worth a visit to see the ceramics, inscribed tablets, glassware and mosaics recovered from local excavation work. 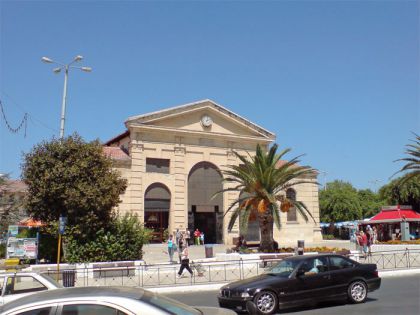 The impressive Market was built on the remains of the bulwark Pietta Forma. The structure is in the shape of a cross with 76 shops grouped according to their wares in the four arms of the cross. The south facade is particularly well constructed out of chiselled limestone according to the local Venetian architecture. The construction was completed in 1913. 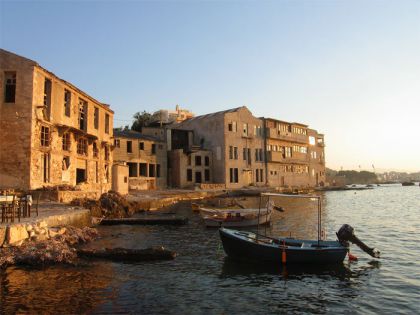 The Tabakaria is known as a district of leather processing houses which grew in the middle of the 19th century. Today few of the leather processing houses are still in operation. The buildings have one floor only on the side of the street and two or three floors on the side of the sea. The buildings are made of stone with tile roofs and they are built close to each other with very narrow, steep passages and steps going down to the sea. Altogether they constitute a unique architectural complex.

The Public Gardens and the Garden Clock-Tower

The public gardens are located between Papandreou and Tzanakaki roads; they were designed by the Turks in 1870 according to a European design. In the gardens there is a cafe, open air cinema, small animal enclosure (the famous kri-kri can be seen here) and a children's library.

The Clock-Tower was added between 1924 and 1927 with an unusual tripartite design. On the same corner, next to the Clock, there is an open theatre which hosts films during the summer.

The newly renovated square 1866 is an important landmark in Chania. The square has statues of local war heroes and a Turkish fountain. It is located on top of Halidon Street, next to the long distance bus station (Ktel) of Chania.